As my closest ones know my birthday is number one day of the year for me. I was born in March and as soon as the New Year's celebrations end, my planning starts! :D
I'm one of those girls memes like this one were inspired by. Yup, that's me. :)) 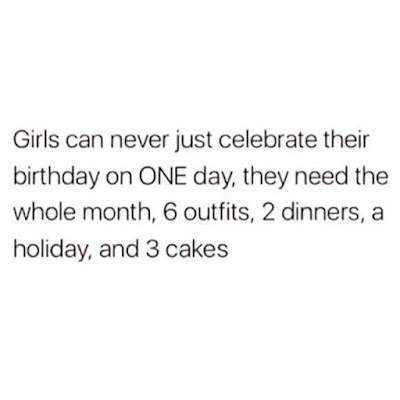 So yes, every year I try to do something special for my birthday. Most of the times that means - travel somewhere! Close or faraway it doesn't matter, as long as it's somewhere I've never been before.This year it was Cappadocia, Turkey. Being lazy as I am, this blog post was supposed to be written 7 months ago, but hey...there's one from last year I still haven't published yet haha.


The idea came to me last summer, while chilling at the beach I said to my friend 'Do you wanna visit Cappadocia for a few days for my birthday?' and she was like 'Tea, it's August, your bday is in March next year!!' I gave her that you-know-me look and she said yes, ok, let's go :))

My sister didn't need much of persuading and the rest was open for whoever wanted to join. 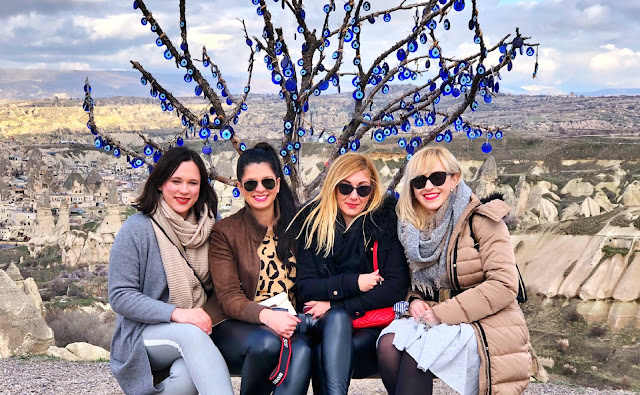 The greatest thing about this trip, besides the destination, was - US!

4 women who never traveled together before (except for my sister and me), some of them didn't even know each other from before and we still had an amazing time. Without having to put any extra effort to please anyone, without losing temper over anything. We didn't even fight over the use of a bathroom hahaha.

There's this saying about how you should be careful who you travel with blah blah...but I think that simply doesn't matter as long as everyone is open minded, easy to communicate with and adaptable to most of the situations. Unfortunately, some of the other girls couldn't join us, otherwise it would be even more memorable than it already is. 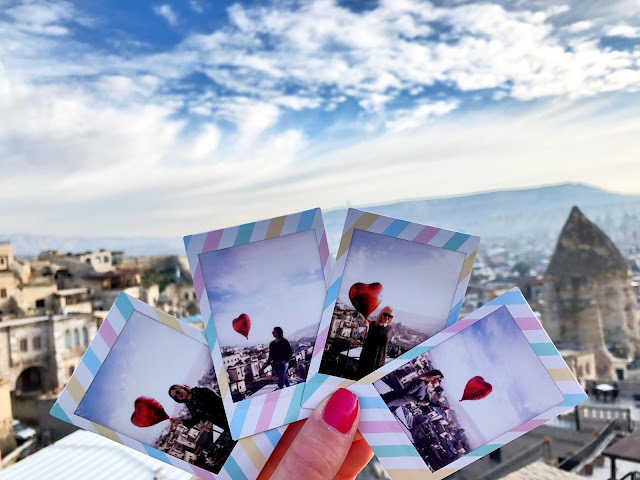 Maybe this post should be all about people you travel with rather than the destination? How do you or did you choose who to travel with? How did you know you'll click and have a great time together? Do you have any negative experiences traveling with your family or friends? My decision is always based on how much they also love to travel from 1 to the end of the world :)

Anyhow, tickets were bought with Turkish Airlines on a special offer for 240 EUR
Zag-Ist-Asr-Ist-Zag. 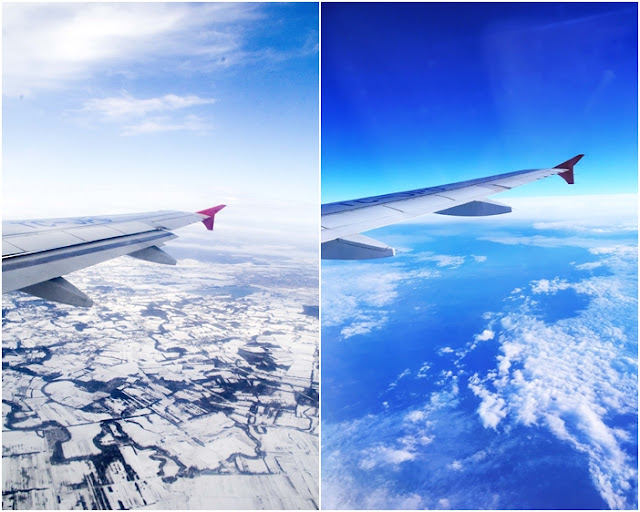 TIP 1: Cappadocia has two airports, make sure you tell your host/hotel if they are picking you up which airport should they come to. :)

Travel dates were mid of March for 5 days. We found our cave rooms over Booking.com and (speaking as a person with a really light sleep) that was the best sleep I had in ages!!!

Göreme is one small town (population of 2000) and Göreme Valley Cave house is located just 5 min walk from all the shops and restaurants in the city center. The price for this room for six people was just 225 EUR for 5 nights (divided on 4 of us...you do the math). 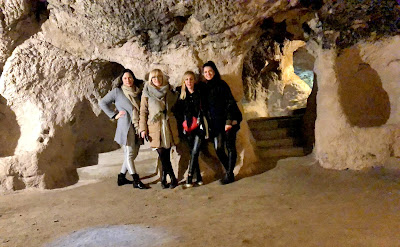 The hosts were really nice and helpful, they organized transfer from and to the airport for 5 EUR per person.

They also organized a tour for us, 25 EUR per person to Derinkuyu underground city, Paradise Valley with a must stop to a Salkim Tepesi Cafe with a beautiful panoramic view. We also visited 'fairy chimneys' which was the best part of that one day trip around Göreme. I think the place we went was called Zemi Valley. The locals say that a part of Zemi Valley is also called Love Valley. Why? See photos below and let me know if you get it. ;) 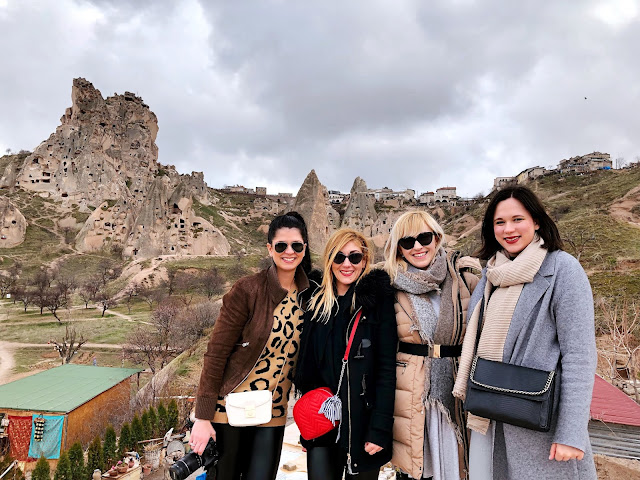 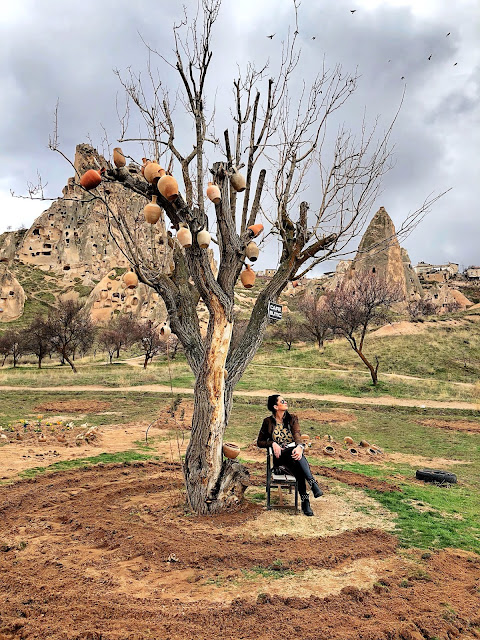 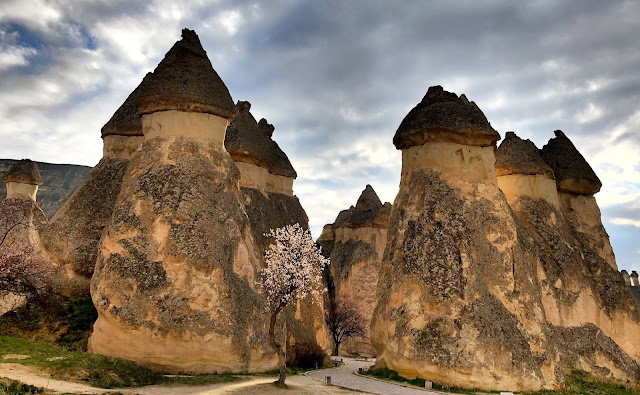 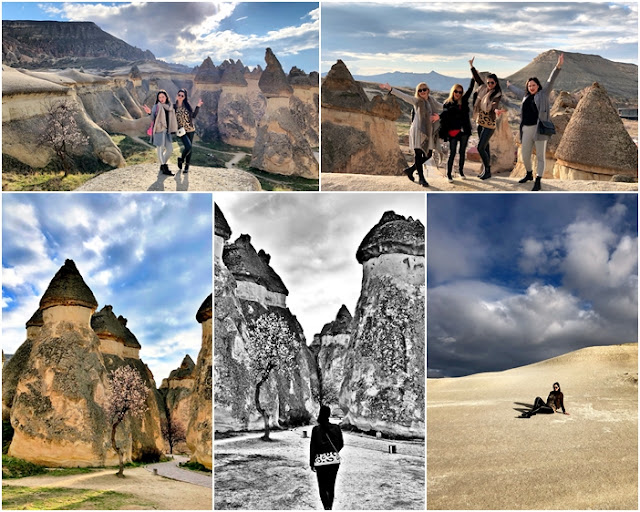 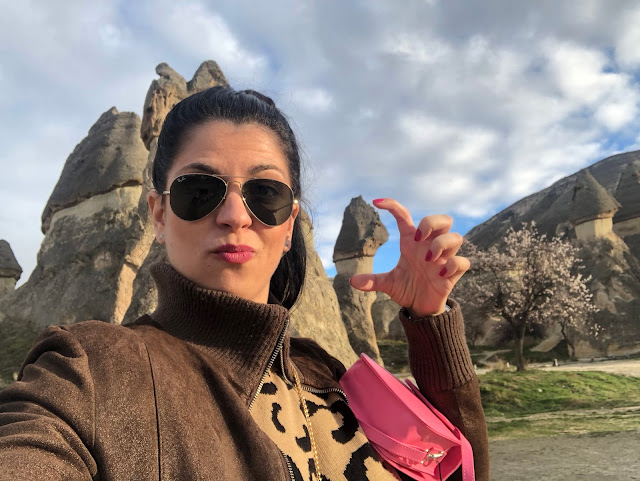 Food wise you don't have to worry. There are street food places and proper restaurants on every corner and you can't decide which one is better 'cause the food is goooood!!! 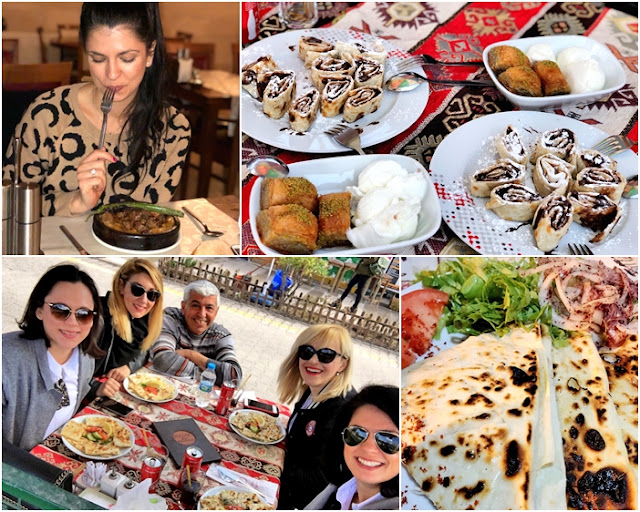 On the second day we had our long awaited balloon ride. One of my favorite birthday presents! The weather was good, the wind was perfect, the sunrise was stunning, the experience was what we hoped it would be.

Göreme museum was on the list as well, for that same afternoon. It is a nice walk from the city center so don't take a car, especially if the weather is good, and enjoy the surrounding nature of Cappadocia.

TIP 2: I hate to bargain but it is necessary if you don't want to be ripped off. Prices between 100-130 EUR are acceptable for the balloon ride in a big basket that holds up to 20 people. For private tours be ready to pay much, much more. You can either set the price online before you even get there or on the spot, it's up to you, but don't say yes to the first one they offer. 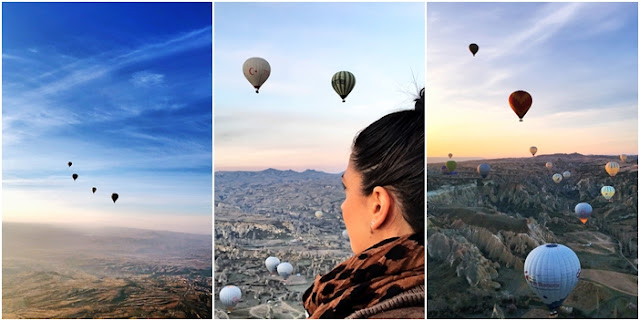 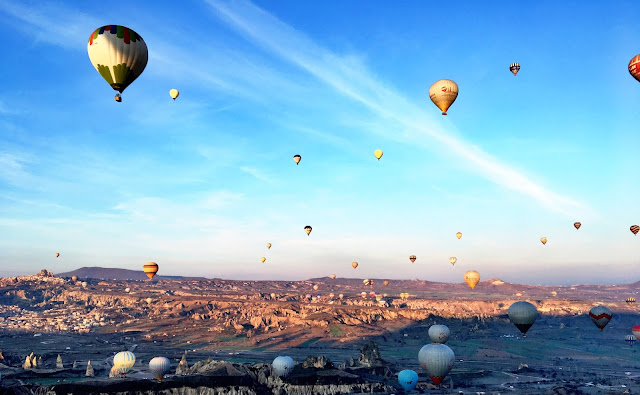 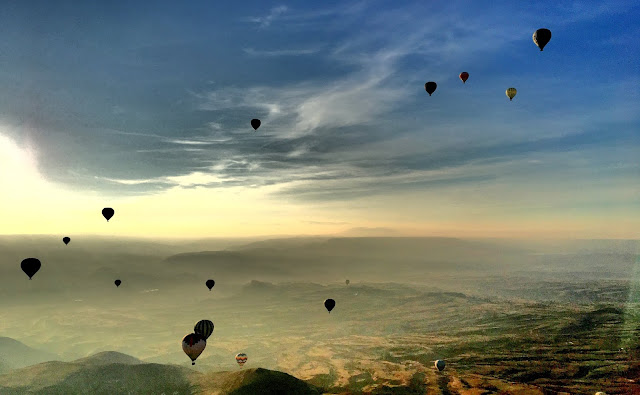 On my actual birthday we had a reservation in one of the hotels for the breakfast with a view but some kind of a mix-up happened and we ended up at the wrong address not having breakfast but at least we entered for free and took some amazing pics :)

As I said, our hosts were really nice so in the evening they brought me a cake, they singed and Mama of the house gave us all little presents.
It was a day full of wonderful moments, warm messages with the nicest wishes and I couldn't been happier...

Tip 3: Just check out some of the best hotels in the city and make a reservation ahead. The photos will be worth the money and waking up at 5 in the morning. 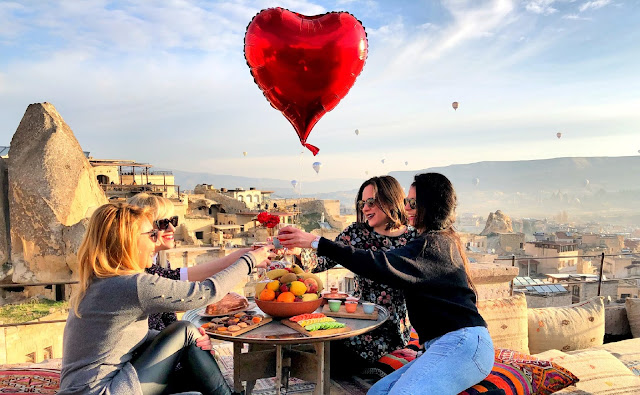 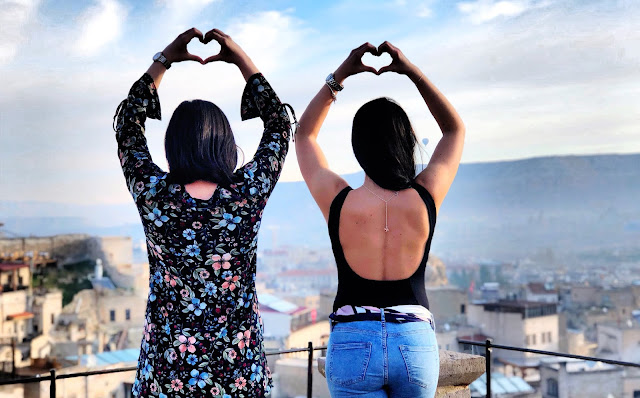 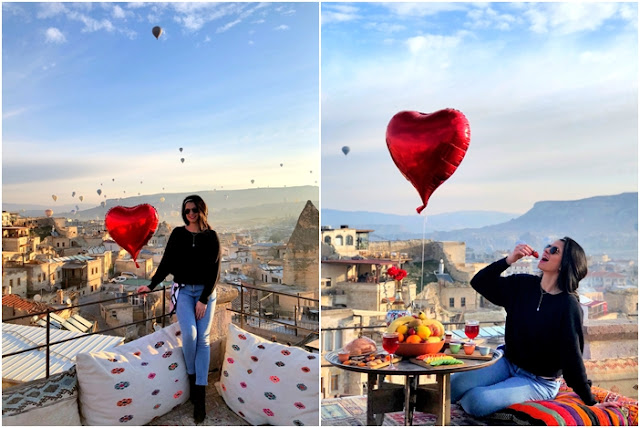 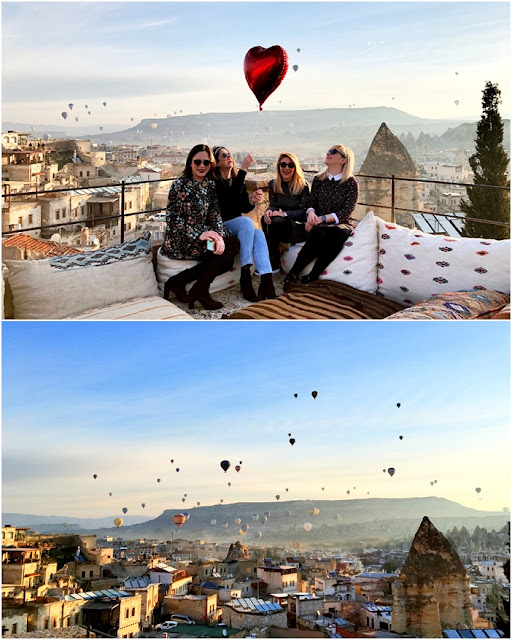 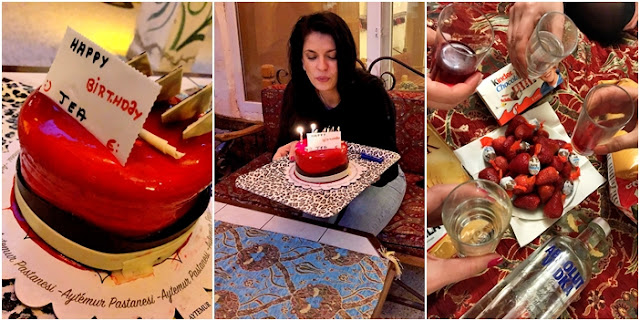 Day 4 was all about chillaxing, walking around, buying souvenirs and food, of course. The Turkish bath we tried didn't really blew our minds but we ticked that off of the list as well. Those few days just flew by and we were already on our way back home... Since we're in October now already try and guess if I have a plan for March? :p 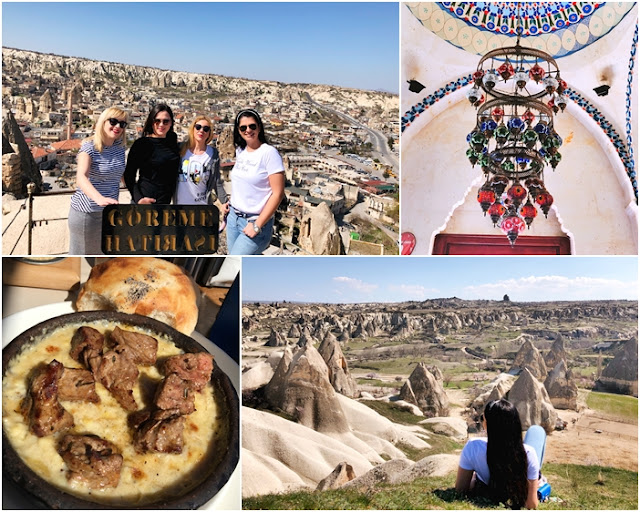 Adventure should be a part of everyone's life.
It is the whole difference between being fully alive and just existing!