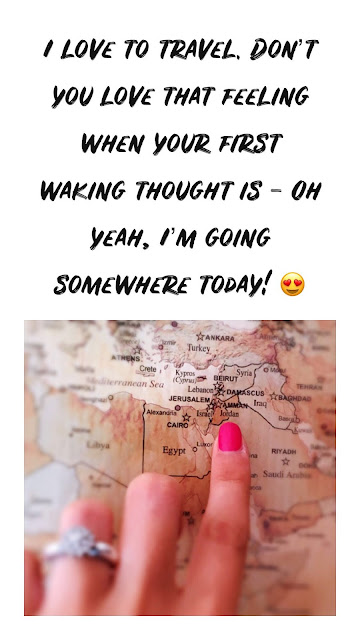 How and how long before do you plan a vacation?
As much as I love to be spontaneous or at least try to, I plan my trips months ahead, which means, even before I return from 'this one' I already know when and where will I go next. Probably even when and where will I go after that 'next one' too.
The reason why is simply because I can’t wait for it, I love to make plans, organize and have something like a new destination to look for!

So, how did we end up planning a trip to Jordan? Fun fact, we were supposed to go to Central America in October/November (Cuba, Jamaica, Bahamas, Mexico...anywhere). In the meantime I changed my job and vacation time was only possible in August. The question was - now what?! Honestly I don't prefer traveling during July and August - prices go up, flights are fully booked, it's too hot or too cold, or too rainy, or too stormy #eyeroll so I started to roll the Globe...

There are certain destinations in the Middle East I haven't been to while living 'in the neighborhood' and after searching for good deals in different parts of the world I ended up looking at Iran, Lebanon, Jordan... Jordan it was! 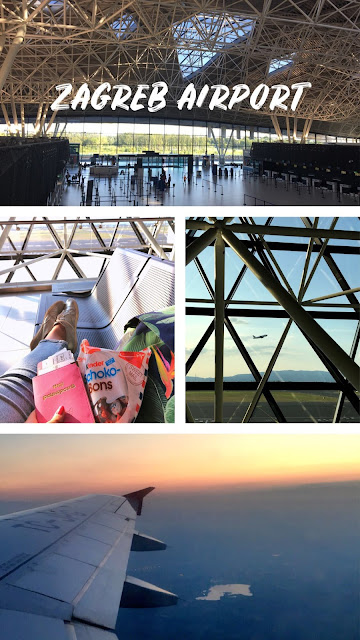 Jordan - officially the Hashemite Kingdom of Jordan is a sovereign Arab state in Western Asia, on the East Bank of the Jordan River. It is bordered by Saudi Arabia to the south, Iraq to the north-east, Syria to the north, Israel and Palestine to the west.
Jordan is relatively small country, a population numbering 10 million.
Dominant religion is Sunni Islam.
Official language is Arabic, but most of Jordanians speak English quite well.
Currency - Jordan dinar (JOD or JD) is one of the strongest currencies in the world, just after Kuwait dinar, Bahrain dinar and Oman rial.

TIP 1: before arriving in Jordan check out the Jordan pass - it includes a visa fee and lots of entrance tickets! We bought the Jordan Explorer and hadn't had to worry about paying the entrance anywhere we went.

Day one: I took the night flight with Turkish airlines from Zagreb to Istanbul and further Amman. Landed around 5 in the morning. Since buses don't operate that early the only way to reach the hotel was taking a taxi. Taxi rates, as Google said, were around 50 EUR, but Jordan has its own version of Uber called Careem.

TIP 2: Download the app, request a car when you pick up your bags from the carousel and head to the departures area where he will come and pick you up. Don't be afraid to answer the phone when some crazy looking number calls (it will say United Arab Emirates is calling you) - they just want to confirm the pick up place for you and the UAE number is calling you because their central office is located there.

Anyhow, the ride from the airport to the Arab Tower hotel, where we stayed for two nights, was 20 EUR! The car was new and clean, the driver was very polite and traveling alone at that moment made me feel very safe. I'm not one of those people who are afraid and who see danger in every thing they do so maybe someone would call me stupid and reckless but that's just me. 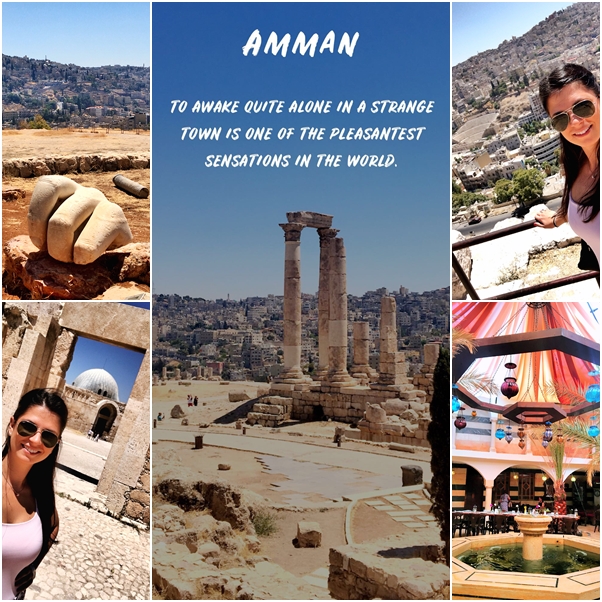 6 am arriving in our hotel in the center of Amman, dead tired, went straight to bed. The receptionist at the hotel was more than helpful with tips on how to reach the Citadel and Rainbow street and of course letting me know how everyone around there knows about Croatia cause they all cheered for us during the World cup

Amman is a city on 7 hills, just like Rome, so make sure to bring comfy shoes and be ready to walk a lot of stairs. The center of the city is very dirty, trash everywhere, however the touristy sights and most of the neighborhoods are clean. They have big fines for littering but somehow people still throw away trash out on the streets!

First one on my itinerary was the Citadel. 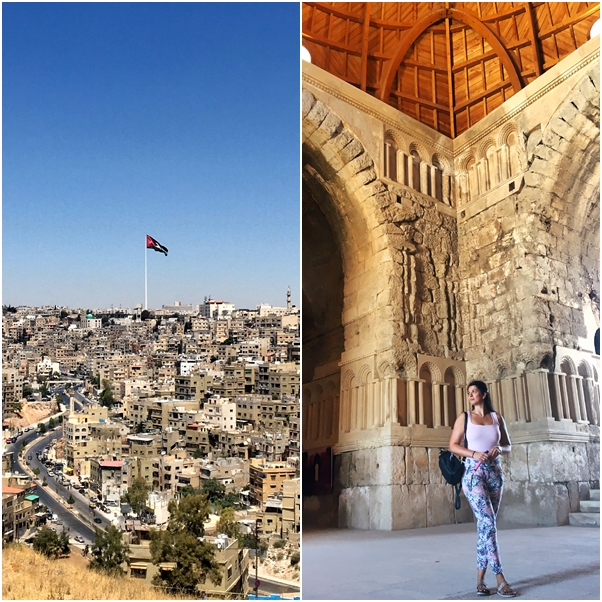 After that I went to Rainbow street - on Fridays there's a flee market Souk Jara, where you can find all kinds of handmade/homemade things made by local small business owners. Souvenirs, food, books... Lovely little street full of stands and interesting things where I bought myself a hand painted shirt and bag - perfect souvenir

Later in the afternoon my sister and her boyfriend finally joined me. 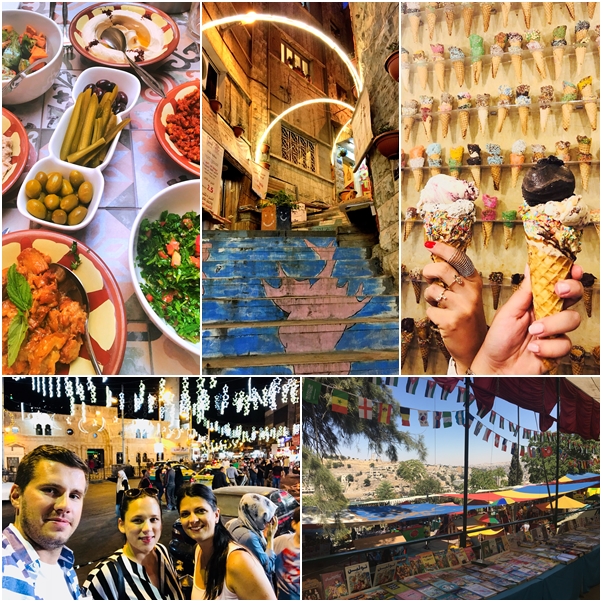 Day two: we rented a car with Europcar for the week (6 days, full insurance, two drivers, wi-fi - 320 EUR) that we picked up at the airport and first on our list was Jerash. Just an hour away from Amman, this historical city is a blend of the Greco-Roman world and the ancient traditions of the Arab Orient. 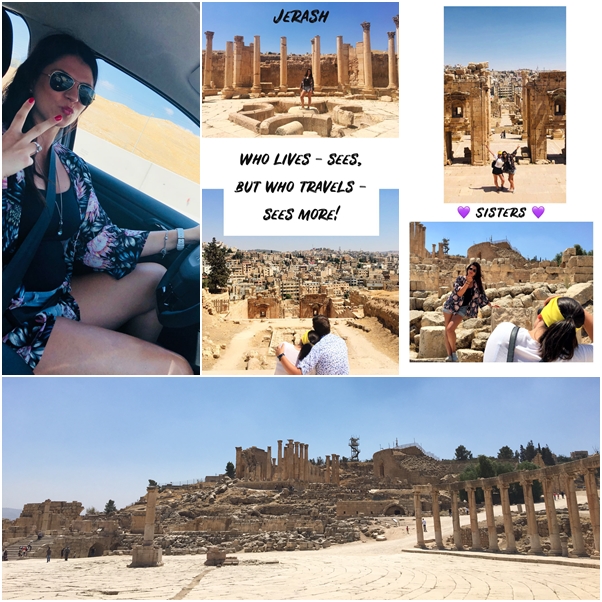 Driving around Jordan was...interesting? Daring? Challenging? A bit crazy? Especially within the cities, but as they say - when in Rome do as the Romans do!
Not for one second we felt unsafe (anywhere in the country!), on the contrary - it's very safe! Lots of check points along the roads, nice and polite police officers welcoming us in their country.
It was a bit strange knowing that just a few kilometers away were the borders of Syria and Iraq, sad feeling of the unfairness in the world... 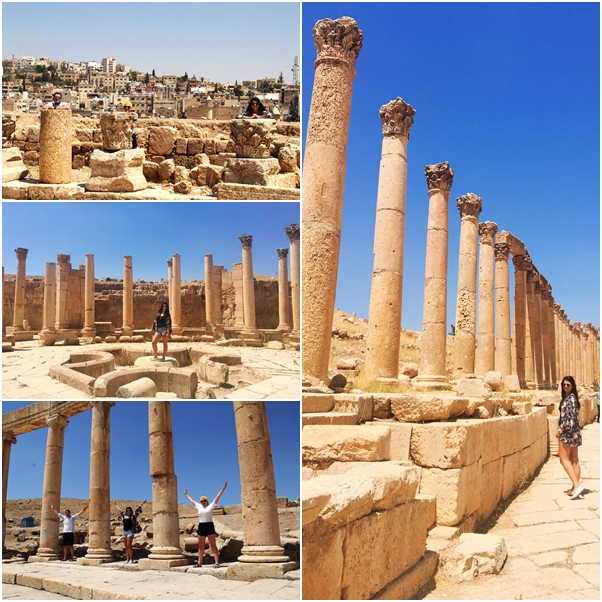 TIP 3: If you plan your vacation in Jordan don't stay in one hotel in one city, don't make it your base and then pay for these one day trips in the hotel. It's a ripoff! The prices are way too high, it's tiring and you will be on the clock. Unless you like it like that, it's up to you at the end of the day. :)

Day three and four: it took us cca 3 hours from Amman to Petra where we stayed in Tetra tree hotel for two nights. 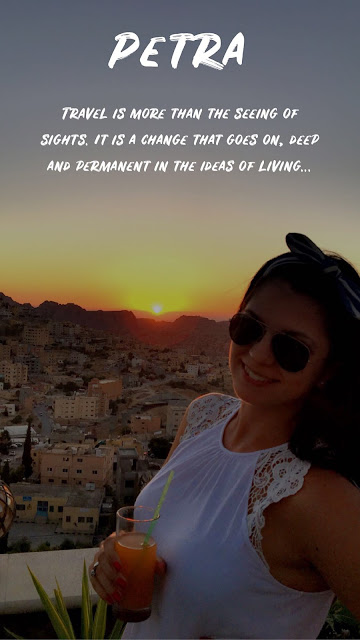 TIP 4: Ask for upgrades in the hotels! Especially if you travel out of season. They will upgrade you without you even mentioning it, but if they don't it doesn't hurt to ask.

If you're looking for a place to eat, we warmly recommend Beit Al-Barakah restaurant where Mohammed will host you like at his own home.
Visiting Petra, the Rose city, no words can fairly describe so I'm not gonna even try to do that. Pictures will do their own magic. 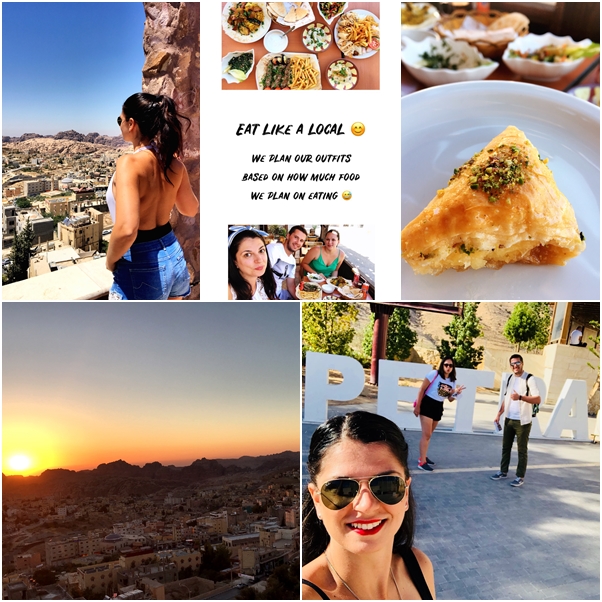 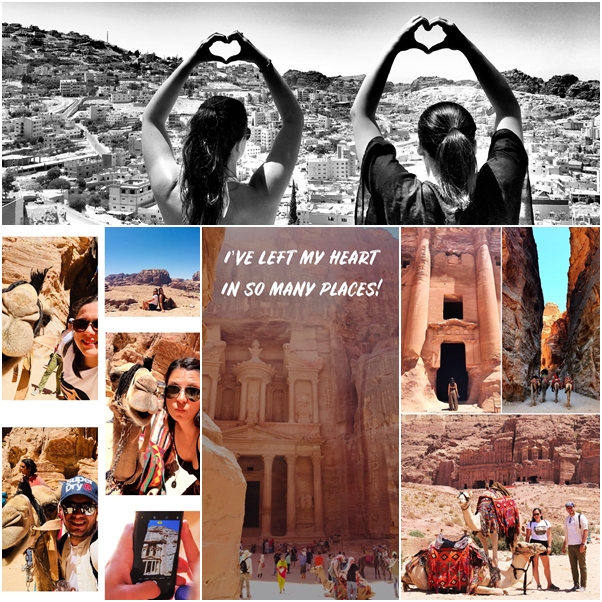 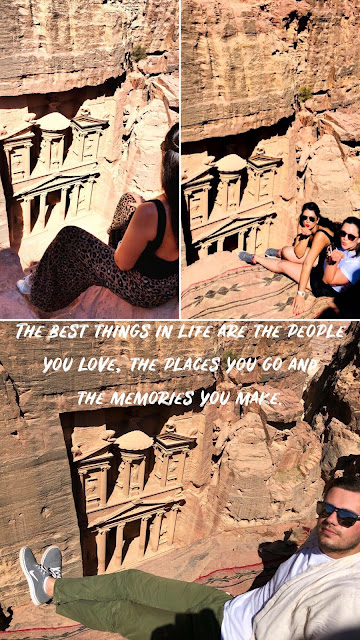 TIP 5: take a guide for 2-2,5 hours. It costs 50 EUR but it's worth it! When you pass the gates they'll offer you a horse ride which is included in the price but be sure to have 5 JOD change per person for tips. Whatever you want to do, be ready to pay extra. If you want to climb up the mountain to take pictures of Petra from above - 10 JOD per person. Donkey ride - another 10 JOD per person, and so on...

We walked approximately 20 kilometers that day! And still didn't reach the most faraway point of Petra - The Monastery. Remember those comfy shoes I mentioned earlier? Good, bring them! 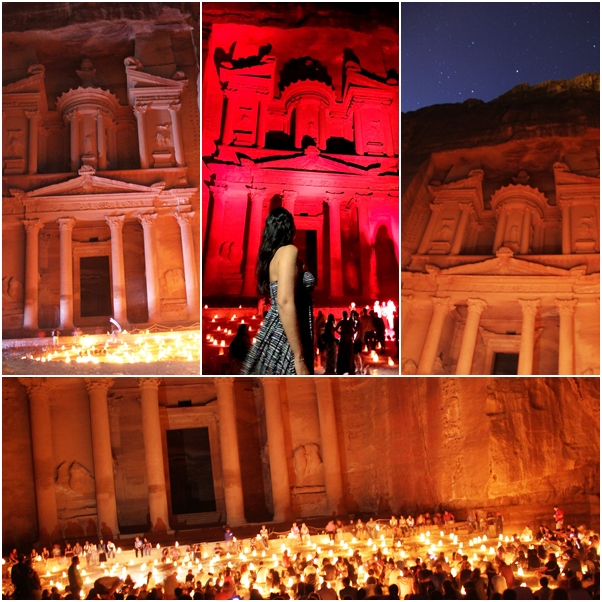 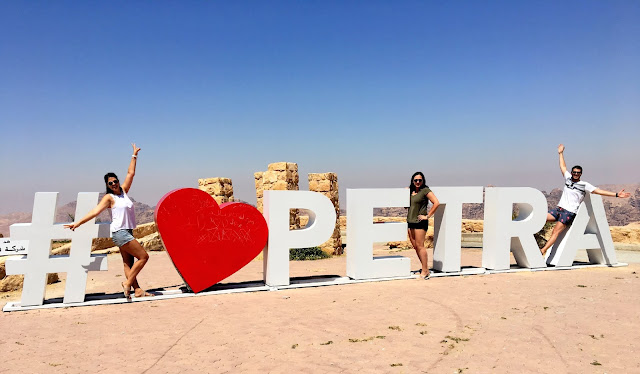 Petra by night is not included in Jordan pass so we payed 20 EUR per person for that experience. Be careful if you want to visit Petra by night because it doesn't happen every night The show runs only on Mondays, Wednesdays and Thursdays.

Day five: on the way to Wadi Rum desert. A place where the movies Lawrence of Arabia and The Martian were filmed, we booked a tent in a Wadi Rum Dream Camp. 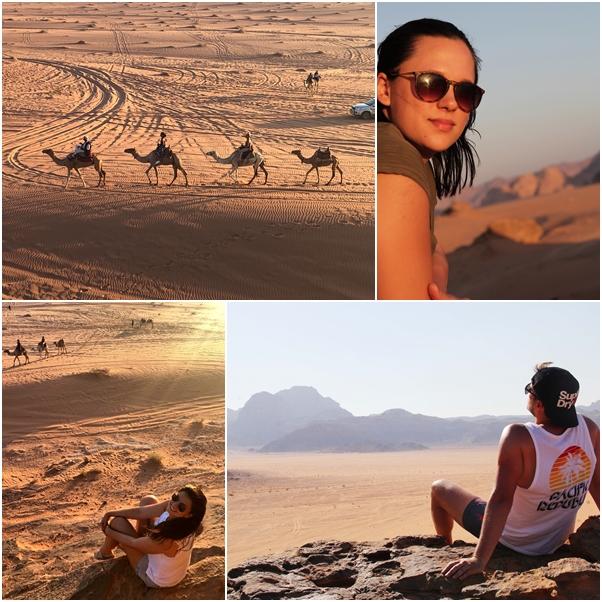 Sleeping in a tent, well, actually it was more like glamping since we were once again upgraded to a better 'room', was a unique experience. And not in a good way haha, we didn't sleep at all, it was too hot, even with the open door the cold night desert air didn't come in and I guess that was the day when all three of us got a bit stomach sick for the rest of our trip.
Beautiful side of spending a night in the desert is the silence! Unimaginable silence, peace and starry sky...
Dinner in the camp was not in the price and it was 10 JOD per person. Sunrise camel ride was 15 JOD per person, and the jeep safari was 50 JOD for the three of us. 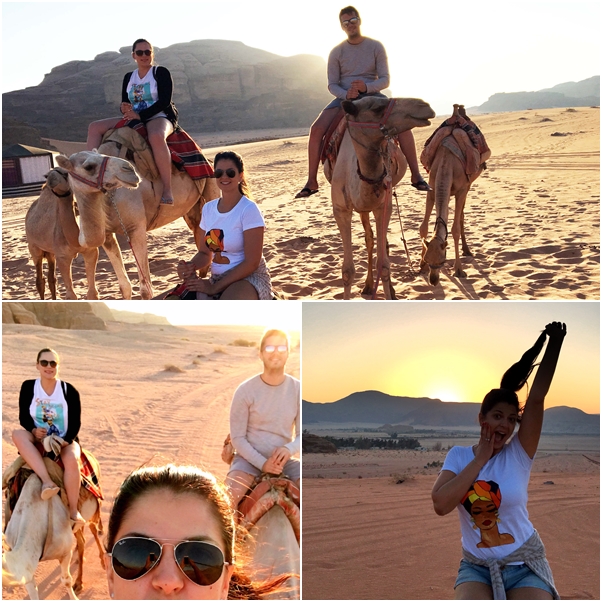 Day six: In the morning we drove down south to Aqaba, the only coastal city in Jordan. Aqaba is a low tax, duty free city, and although is one of the major tourist attractions in Jordan I wouldn't recommend going there. We spent the lazy day at the beach of the Red Sea and by the pool. Maybe because we were sick and exhausted and didn't eat or sleep properly that place didn't leave any significant impression on me. We stayed at Dweik hotel 2. 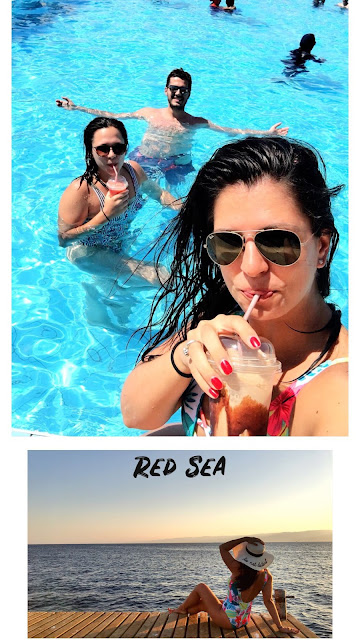 Day seven: The Dead sea. Didn't know what to expect, how the 'beach' will look like so we ended up a bit disappointed. Only big fancy resorts and two smaller ones with special prices for the locals are located along the coast. Fancy hotels are more than expensive if you just wanna spend a few hours at the pool and use their beach and showers. We found a smaller no-name one, payed 20 JOD per person to get in, float in the Dead sea, shower and leave. It is something you HAVE TO DO, however, in my opinion, it's not worth the time, energy or the money, unless you stay in one of those super expensive fancy and clean places haha. 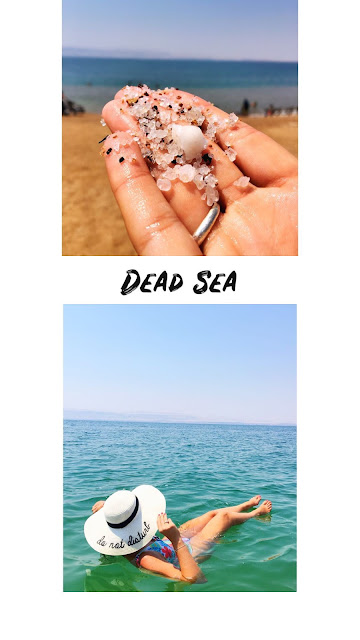 We got back to Amman and went to one of the shopping malls, just to walk around and have some proper dinner after two days of eating almost nothing. My flight was scheduled that same night, while D and H stayed another day before their flight back. And the hotel they stayed in was really nice - Gallery Guest Hoouse.
Another night flight back home and the vacation time was over before I even realized it. 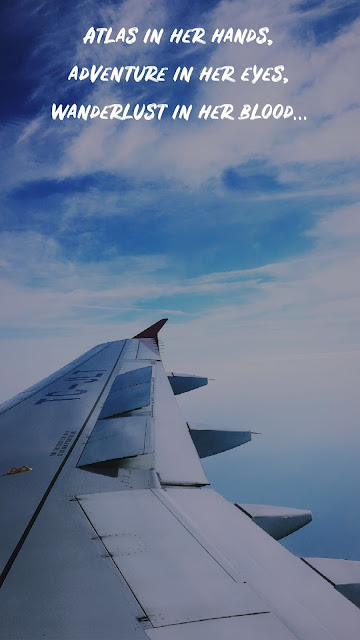 Put Jordan on your Bucket list, Places to visit before I'm too old to walk or drive list or whatever list of travel wishes you have - you won't regret it!
If nothing else, being hummus and tabouleh lover like me, you'll definitely enjoy every bite of this trip. :)

Objavila Tea the traveler at 1:50 PM